Geographically, Utah is a place of great contrasts. Salt Lake City is located in northern Utah where there are mountains, lakes, and forests. The state motto is “The Greatest Snow on Earth”. We have seven ski resorts within a few minutes of the University of Utah campus. These same mountains provide great outdoor activity all year round, including rock climbing, hiking, boating, fishing, biking, and camping.

Why the strange name?

To the west of the city there is a large and very salty lake, hence Salt Lake City.

So people go sailing on this lake?

The lake is too salty for many water sports. In fact, the lake is thought to be the second saltiest lake in the world, second only to the Dead Sea. Great Salt Lake is a worthwhile boating destination with several islands to explore. Also, it is one of the largest destinations for migratory birds in Western North America and a great place for bird watching. 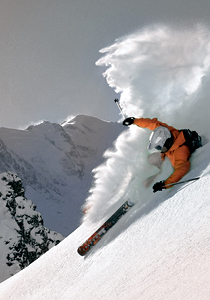 So where do people ski?

To the east of the city are the Wasatch Mountains, part of the great Rocky Mountain range and home to seven world-class ski resorts. These resorts are just minutes away from the University campus. If you love skiing, snowmobiling, hiking, climbing, fishing, camping, sailing, or just about any other outdoor activity, Salt Lake is the place to be.

Yes, and it's getting bigger. About 200,000 people live in Salt Lake City proper. In the surrounding towns, which merge together into the Salt Lake Valley, there are over a million people. What is the weather like? Salt Lake City has four seasons, and it can get pretty hot in the summer and, of course, we get snow in the winter. Most of the time, the climate is fairly mild.

Salt Lake is a very beautiful city, set in a valley at the base of the Wasatch Mountains which is part of the great Rocky Mountains range. In many ways, Salt Lake City is a western city, with a somewhat slower pace than larger cities and with the feel of a small town. People here are casual and very friendly. However, we have all the amenities of a large city including concerts, plays, ballets, symphonies, operas, and basketball, football, baseball, and soccer. Also, like any major city, there are plenty of good places to shop, eat, and relax. Salt Lake City is a very enjoyable place to live.

Utah is politically conservative, Salt Lake City less so. Every political point of view is represented here, as well as numerous faiths and religions. Salt Lake City also has a diverse population with almost every ethnic group represented.

Is there anything else interesting in Salt Lake?

Salt Lake is growing and changing, and has become much more diverse. New people bring new interests and vitality to the city. Salt Lake City is also the economic, political, and cultural hub of Utah and is sometimes referred to as the “crossroads of the west.”

Would I like living in Salt Lake City? Yes!